Skip to content
Recently, the “American Journal of Health Behavior” released a report “Model Analysis of the Impact of ENDS (Electronic Cigarette) on the Health of the U.S. Population”. The study hopes to improve the American people’s correct understanding of e-cigarettes. Studies have found that popularizing e-cigarettes will reduce smoking rates faster and prevent 2.5 million premature deaths in the United States by 2100.
The researchers stated in their conclusion, “The results show that e-cigarettes will have a positive impact on public health after taking into account the pros and cons.” 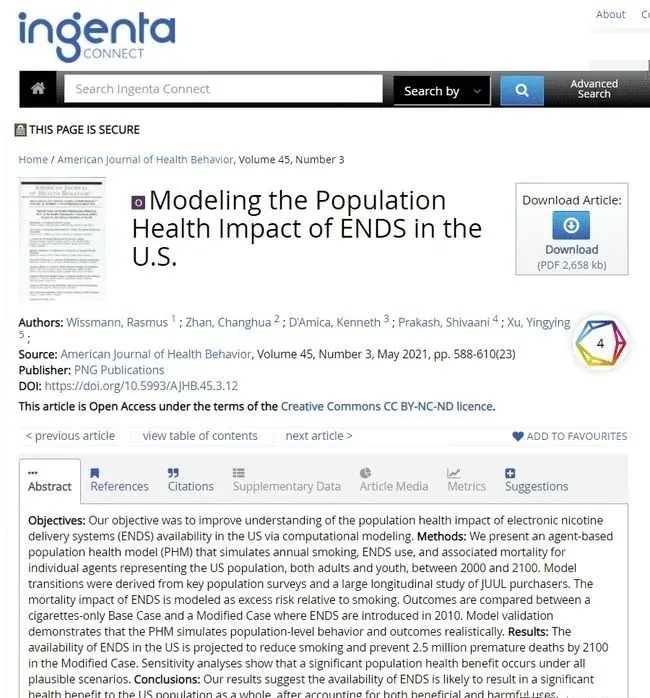 Picture: The report was published in the American Journal of Healthy Behavior
Although the smoking rate in the United States has been declining, there are still about 34 million smokers. Smoking causes about 480,000 premature deaths each year. This is also the largest avoidable cause of premature death in the United States.
Switching cigarettes to e-cigarettes can effectively reduce harm
The report believes that e-cigarettes will be a very effective means of tobacco control, and for this reason cites the research conclusion of the Royal College of Physicians of the United Kingdom, “e-cigarettes can reduce harm by 95% compared to cigarettes.”
In order to more accurately assess the overall impact of e-cigarettes on smokers and non-smokers, this study uses a population health model (PHM) established through calculation and statistical techniques for evaluation. This evaluation method integrates a number of data to deduce the impact of e-cigarettes on the population in various situations. This is also a relatively advanced research method in the world.
The study assumes two situations. One is that e-cigarettes have never appeared, and smokers only have a choice of cigarettes. Second, after the popularization of e-cigarettes in 2010, some smokers have begun to use e-cigarettes. The difference between the results of the two scenarios is used to prove the impact of the emergence of e-cigarettes on the health of the American population.
In order to comprehensively consider the impact of various factors on the research, the researchers also added a variety of research methods such as sensitivity testing and counterfactual situations to ensure that the research results are as realistic as possible. In the end, the research results show that if some smokers switch to e-cigarettes, the smoking rate will decrease, which will save 2.5 million Americans from premature death by 2100. 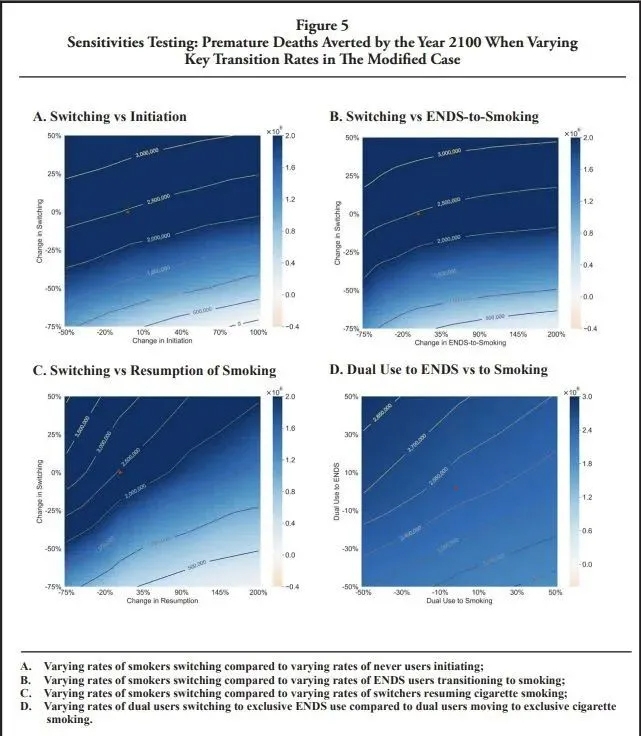 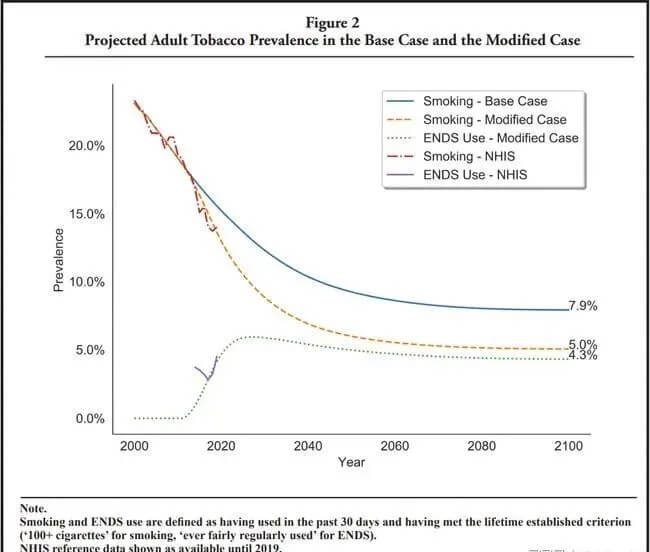 Figure: After the popularization of e-cigarettes, the smoking rate has dropped faster and more
The report points out that the research data derived from the use of e-cigarettes in the study is very consistent with the previous actual data of the US National Health Survey (NHIS), which also provides strong data support for this study.
In addition, the study also conducted data deductions for the problem of smoking among young people. The conclusion shows that the emergence of e-cigarettes will make the smoking rate of young people even lower in the future.

Figure: Data shows that after the emergence of e-cigarettes, the smoking rate of teenagers is more than half lower than that of no e-cigarettes
Finally, the report concludes that as more and more research institutions use population health models to deduce the impact of e-cigarettes on public health, most studies have found that the popularity of e-cigarettes will reduce smoking rates, which in turn will have long-term effects on public health. positive influence. This conclusion may help the government and researchers better judge how to regulate e-cigarettes, such as encouraging smokers to switch to e-cigarettes, and preventing young people from smoking and using e-cigarettes.
Combined with previous researches on e-cigarettes by multiple authoritative organizations, more and more people have realized the harm reduction of e-cigarettes. In the context of global tobacco control becoming a major trend, absolute smoke-free cannot be achieved immediately, so harm reduction It will definitely be the most valuable choice. This report draws the most intuitive conclusions from the data, and also proves that under scientific supervision, e-cigarettes can circumvent its negative effects to the greatest extent and contribute to tobacco control.